Towards compact quantum computers, thanks to topology

First light at Furka: The experiments can begin

The path to experiments that are unique in the world is now open.

Light is essential for life, and for researchers it is also a wonderful tool to better understand the structure of materials.

A new PSI method allows quantum-physical research on materials with the aid of X-ray lasers.

During the past decade, scientists have put high effort to achieve sub-10 nm resolution in X-ray microscopy. Recent developments in high-resolution lithography-based diffractive optics, combined with the extreme stability and precision of the PolLux and HERMES scanning X-ray microscopes, resulted now in a so far unreached resolution of seven nanometers in scanning soft X-ray microscopy. Utilizing this highly precise microscopy technique with the X-ray magnetic circular dichroism effect, dimensionality effects in an ensemble of interacting magnetic nanoparticles can be revealed.

In a joint research effort, an international team of scientists lead by Emmanuelle Jal (Sorbonne Université) performed a time-resolved experiment at the FERMI free-electron laser to disclose the dynamic behavior of two magnetic element of a compount material in only one snapshot. The X-ray Optics and Applications group developed a dedicated optical element for this experiment that is usable with two different photon energies (colors) simultaneously.

The first endstation at the SwissFEL Athos soft X-ray branch is rapidly developing and on track for first experiments in 2021. 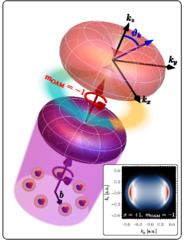 Photoelectric Effect with a Twist

In a joint research effort, an international team of scientists lead by Prof. Giovanni de Ninno (University of Nova Gorica, Elettra Sincrotrone Trieste) now demonstrated that an OAM-dependent dichroic effect can be observed on photoelectrons. The photoelectrons are released from a sample of He atoms that is excited by the strong extreme ultraviolet light pulses from the FERMI free electron laser, whereas the orbtial momentum is imprinted with an intense infrared laser pulse. The X-ray Optics and Applications group of PSI supported the team with their experience in the creation of OAM beams and during the experiments. 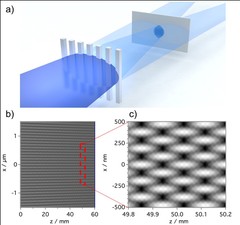 5232 — The magazine of the Paul Scherrer Institute