in the Photon Science Division

The research focusses on condensed matter and materials science using synchrotron radiation. For this we use the whole range of spectroscopy, imaging and diffraction techniques.

When magnetism meets topology, colorful novel states can emerge in condensed matter. It is widely believed that parity-time symmetry plays an essential role for the formation of Dirac states in Dirac semimetals. So far, all of the experimentally identified topological nontrivial Dirac semimetals possess both parity and time reversal symmetry. Since the magnetism will break time-reversal symmetry, only in special cases the Dirac states can be protected in a magnetic system. Thus, the realization of magnetic topological Dirac materials remains a major issue in the research of topological physics. In this work, the authors ascertained that the ground state of EuCd2As2 is a good candidate for magnetic topological Dirac semimetal when the spins point in the out-of-plane direction in the A-type antiferromagnetic phase. The Dirac state is protected by the combination of parity-time symmetry with additional translation operation. Moreover, when the spins deviate from out-of-plane direction, the bulk Dirac cone will open a gap, and the system develops into a novel state containing axion insulator, antiferromagnetic topological crystalline insulator, and higher order topological insulator. 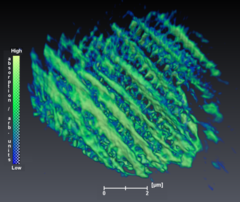 3D imaging using synchrotron radiation is a widely used tool that allows access to the inner structure of complex objects. An international and interdisciplinary consortium of scientists from the Swiss Light Source (PolLux and cSAXs), the Friedrich-Alexander-Universität Erlangen-Nürnberg, and the University of Cambridge developed the new 3D imaging technique of Soft X-ray Laminography (SoXL). SoXL allows for the investigation of thin and extended samples while taking advantage of the characteristic absorption contrast mechanisms in the soft X-ray range, providing 3D information with nm spatial resolution. 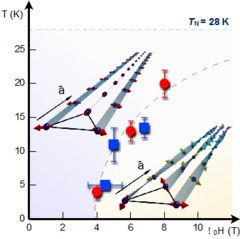 X-rays and neutrons has been used to investigate the correlation between structural and magnetic chirality in magnetic fields and its impact on the polarization in multiferroic langasites. A long wavelength modulation of the magnetic structure has been found, and it is shown that the chirality of the crystals structure connects to chirality of the magnetic structure that leads to an additional electric polarization in this field induced phase, which, depending on the christal chirality, can either increase the electric polarization or lead to a reversal of it for increasing magnetic fields. The theoretical description based on allowed Lifshitz invariants intriguingly contain all the essential ingredients for the realization of topologically stable antiferromagnetic skyrmions.