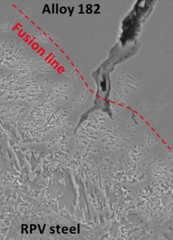 Several stress corrosion cracking (SCC) incidents recently occurred in Alloy 182 - reactor pressure vessel (RPV) dissimilar metal welds in boiling water reactors (BWR). These SCC cracks tend to grow towards the RPV due to weld microstructure and residual stress profiles and might grow into the RPV. They thus represent a serious potential safety concern. PSI has evaluated under which conditions such cracks could grow into the RPV and also developed SCC crack growth disposition curves for the RPV steels that can be used for safety assessments of such cracks. With these curves that were recently accepted as a new Code Case N-896 in the ASME Boiler and Pressure Vessel Code, sufficient safety margins could be demonstrated for such crack configurations with the current inspection intervals of the periodic in-service inspection. 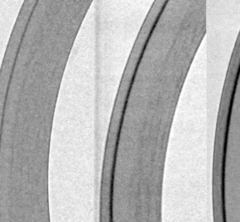 Hydrogen is at the source of degradation mechanisms affecting mechanical properties of many structural metal materials. In nuclear power plants, zirconium alloy fuel cladding tubes take up a part of the hydrogen from coolant water due to oxidation. Because of the high mobility of hydrogen interstitial atoms down temperature and concentration gradients and up stress gradients, hydrogen distribution in fuel claddings can often be non-uniform, arising the risk for the integrity of spent fuel rods under mechanical load. At the Laboratory of Nuclear Materials (LNM) in collaboration with the Laboratory of Neutron Scattering and Imaging (LNS), hydrogen redistribution in zirconium alloys was quantified by neutron radiography using the state-of-the-art detector of PSI Neutron Microscope, and the concentration was computed based on thermodynamics, to predict hydrogen diffusion and precipitation for used nuclear fuel. 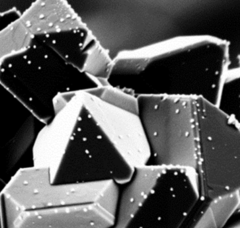 In nuclear reactors, water is dissociated at the surface of the hot fuel elements, thereby producing hydrogen. This hydrogen can penetrate the fuel cladding surrounding the actual fuel and weaken it mechanically. Researchers from the Paul Scherrer Institute (PSI) have been using neutrons and synchrotron radiation to study how the hydrogen gets into the cladding tube and what impact it can have once inside.