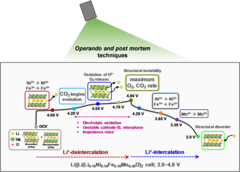 Lithium-rich layered oxides, containing cobalt, despite being promising high-capacity cathode materials, need alternatives to eliminate toxic and geopolitically restricted cobalt. An ongoing search for low-cost, Co-free Li-rich cathode materials with a better structural stability lead to investigation of Li1.16Ni0.19Fe0.18Mn0.46O2 (LNFM), where cobalt is replaced by abundant iron. Our LNFM not only delivered a high capacity of 229 mAh/g but also has a stable average discharge voltage when cycled to upper cutoff potential of 4.8 V in additive-free electrolyte.

To improve the performance of single atom catalysts (SACs),  the structure of their active sites under operative conditions needs to be better understood. For this, we have performed in situ X-ray absorption spectroscopy measurements using a modulation excitation approach selectively sensitive to the species involved in the electrochemical reactions. This has allowed us to study the structural changes undergone by two types of SACs, and to tie the observed differences to their catalytic activities.

The conversion efficiency for green hydrogen production in a polymer electrolyte water electrolyzer (PEWE) is strongly influenced by the ohmic cell resistance and therefore the thickness of the membrane used. The use of thin membranes (~50 micron or below) is limited by gas crossover of H2 and O2, which can lead to the formation of explosive gas mixtures. The incorporation of a recombination catalyst provides remedy and allows a more dynamic operating mode. 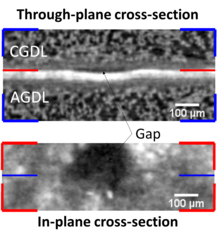 Direct evidence of in situ Co-oxyhydroxide formation on the surface of La0.2Sr0.8CoO3-δ water splitting catalyst

We carried out in situ and ex situ ambient pressure X-ray photoelectron spectroscopy (APXPS) experiments on a La0.2Sr0.8CoO3-δ perovskite oxygen evolution reaction (OER) catalyst. The study shows that Sr is leached into the electrolyte after immersion, leading to surface Co active site enrichment. Such a Co-enriched surface evolves into a new phase during operation. With the help of theoretical simulations, such a species is assigned to Co-oxyhydroxide, providing direct evidence of its formation during the OER. 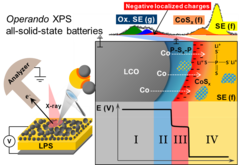 All-solid-state lithium batteries are a promising alternative for next generation of safe energy storage devices, provided that parasitic side reactions and the resulting hindrances in ionic transport at the electrolyte-electrode interface can be overcome. Motivated by the need for a fundamental understanding of such interface, we present here real-time measurements of the (electro-)chemical reactivity and local surface potential at the electrified interface Li3PS4 and LiCoO2 using operando X-ray photoelectron spectroscopy.

Fluoroethylene-carbonate is often referred to as a film-forming electrolyte additive for Li-ion batteries, resulting in high quality Solid–Electrolyte-Interphase on negative electrode, however, the underlying mechanism, even if thought to be known, has been only clarified due to our targeted experimental design, combining systematic electrochemical, chemical and microscopy characterization techniques. We have shown that first the formation of inorganic LiF-rich particles appear and only later the carbonate-rich film is actually formed.

The Lithium conducting electrolyte is a critical component of Li-ion batteries, as it has an important impact on performance and its durability, in particular in case of extreme environmental conditions. At low temperatures, a partial solidification can occur, while high temperatures can promote the degradation of the electrolyte. Using time-of-flight (ToF) neutron radiography, the possibility of imaging such changes in a fully non-invasive manner was demonstrated for the first time.

PSI researchers have developed a new methodology for studying the complex transport processes in polymer electrolyte water electrolysis (PEWE). Using advanced operando X-ray tomographic microscopy, we were able to observe for the first time the formation of oxygen pathways in the porous transport layer, in three dimensions. Understanding oxygen transport is crucial for improving PEWE technology and this work provides precious insights for the design of future, better-performing PEWE cells.