The compounds known as ‘pyrazinacenes’ are simple, stable compounds that consist of a series of connected nitrogen-containing carbon rings. They are suitable for applications in electrochemistry or synthesis, as the researchers describe in the science journal Communications Chemistry. They were first designed, synthesized and chemically characterized in solution by the Hill team and carefully investigated by Scanning Tunneling Microscopy and Surface Chemical Analysis. The compounds have been shown to reversibly release and accept electrons and arrange themselves differently depending on the oxidation state. Interestingly, the oxidation and reduction reactions of the pyrazinacenes are not only affected by a chemical impulse, but can also be stimulated by light so they can be considered photo-redox active.

During the week of March 15 – 19, we had the pleasure to welcome 20 international PhD students, PostDocs and assistant professors at PSI, taking part in the first virtual HERCULES SCHOOL on Neutrons & Synchrotron Radiation. 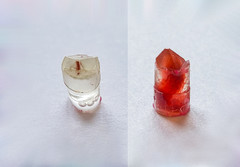