The upgrade of the SLS to a diffraction-limited storage ring (DLSR) will benefit in particular those experimental techniques that exploit coherence and/or beam collimation and tight focussing. The increased coherent fraction, of the order of several percent in the hard x-ray regime, will greatly enhance phase-contrast tomography and lensless-imaging techniques such as ptychography; the ability to focus down to micron dimensions while maintaining excellent collimation will allow the investigation of proteins that only form micro- and nanocrystals, most notably membrane proteins and G-coupled protein receptors (GCPRs). The below articles contain recent news and examples, all performed at the SLS, which have been selected as representatives of some of the clearest scientific drivers for the upgrade of the SLS; such experiments at SLS 2.0 will be able to be performed either much more rapidly, or with significantly greater spatial resolution.

In December 2020 the Swiss parliament approved the Swiss Dispatch on Promotion of Education, Research and Innovation (ERI) for 2021 to 2024 which includes funding for the planned SLS 2.0 upgrade. The new machine will lead to significantly increased brightness, thus providing a firm basis for keeping the SLS and its beamlines state-of-the-art for the decades to come. The TOMCAT crew is very excited that the TOMCAT 2.0 plans (deployment of the S- and I-TOMCAT branches, see SLS 2.0 CDR, p. 353ff) have been included in the Phase-I beamline upgrade portfolio. These beamlines will receive first light right after the commissioning of the SLS 2.0 machine around mid 2025. A first milestone towards this goal has just been achieved, with the successful installation of the S-TOMCAT optics hutch during W1 of 2021. The TOMCAT scientific and technical staff would like to thank Mr. Nolte and his Innospec crew for delivering perfectly on schedule. 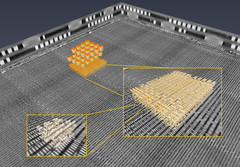