Between the years 2015 and 2019, PSI coordinated a project investigating the pebble bed high temperature gas-cooled (HTGR) reactor aside with molten salt reactor (MSR) concepts and the use of thorium fuel. The project involved different groups from the ETH domain and the main purpose is to build-up the specific know-how in Switzerland that is necessary to provide in-depth information to decision makers and identify research needs for the future. Several key aspects of both HTGR and MSR reactors were addressed in this research project. These include economic and accident phenomenology studies of the HTGR, fuel cycle optimization of both MSR and HTGR, as well as a study on waste volume reduction of the pebble bed reactors.

In nuclear safety analyses, the assessment of hydrogen release, distribution, and mitigation in the containment has high relevance, because under certain postulated scenarios, combustible mixture could form and hydrogen explosions could damage safety systems.

Safety analyses is carried out using advanced computational tools that have been assessed and validated through a variety of the analyses based experiments representative of the phenomena postulated in the containment and obtained in highly instrumented thermal-hydraulics facilities.

The OECD/NEA HYMERES project (www.psi.ch/en/teg/projects) was carried out to create an experimental database consisting in 24 PANDA tests and 9 MISTRA (CEA, France) tests devoted to phenomena with high relevance in nuclear safety. In two PANDA tests identified as HP6_1 and HP6_2) was investigated the effect of complex natural circulation in a PWR two-room type containment, on the hydrogen distribution, during postulated accidents [1]. The PANDA test specifications have been determined based on scoping analyses with the GOTHIC and APROS advanced computational tools [2].

Identifying a disturbance root-cause from ... noise!

Nuclear reactors are complex systems with inherent stochastic behaviour. In simple words, the behaviour of various reactor processes are continuously fluctuating over their mean values, even under normal operation and steady-state conditions. The detailed and systematic analysis of this noisy behaviour can reveal valuable information about the operating status of the studied nuclear reactor. More importantly, designed modifications of the reactor’s operation or even unexpected deviations from the normal performance can be identified using advanced signal analysis techniques. The STARS program, at the Laboratory for Reactor Physics and Thermal-Hydraulics (LRT) in PSI, based on a tight collaboration with the Swiss nuclear industry, has developed a well-established signal analysis methodology, being continuously improved since more than two decades. The latest enhancements of the PSI signal analysis methodology allow a deeper understanding of the underlying mechanisms that drive the reactor’s operation, and can provide better insight on the root-cause of possible disturbances or malfunctions. Recently, the latest STARS activities in advanced signal analysis techniques were culminated by an international recognition through a special distinction from the AIP Chaos Journal. 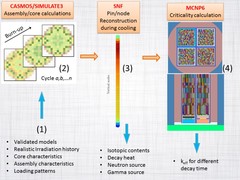 Spent fuel management is becoming one of the major concerns in many countries with a nuclear program. The radiation aspect as well as the safe and economical part of the long-term storage of the spent nuclear fuel has to be evaluated with a high degree of confidence. To assist such project from the neutronic simulation side, a new method is proposed to systematically calculate at the same time canister loading curves and radiation sources, based on the inventory information from an in-core fuel management system. 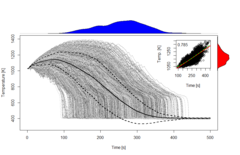 Global sensitivity analysis (GSA) is routinely applied in engineering to determine the sensitivity of a simulation output to the input parameters. Typically, GSA methods require the code output to be a scalar. In the context of thermal-hydraulic system code, however, simulation outputs are often not scalar but time-dependent (e.g. temperature profile). How to perform GSA on these outputs? 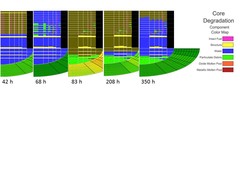 The Accident at the Fukushima Daiichi Nuclear Power Station, which occurred in March 2011, had a very strong impact on the nuclear community. Three reactors suffered core damage and fission products were released to the environment. Paul Scherrer Institute (PSI) has participated in an Organisation for Economic Cooperation and Development (OECD) project, Benchmark Study of the Accident at the Fukushima (BSAF). The project aimed to evaluate and analyse the accident progression, likely end-state of the reactor core after the accidents, and the release of radioactivity to the environment. PSI has concentrated on the analysis of unit 3 using MELCOR 2.1. Hundreds of calculations have been performed and a plausible scenario which predicted remarkably well the main signatures has been selected. 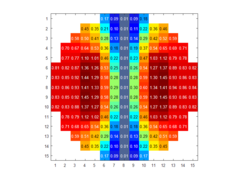 Noise appears in many areas of science, and commonly has an unwanted and disturbing nature by deteriorating signals’ quality. Therefore, various techniques have been developed over the years for separating noise from pure signals. However, noise has a key role in signal analysis of nuclear reactors as its’ appropriate assessment can be used not only for exploring the normal and dynamic behaviour of nuclear cores, but also for identifying and detecting possible anomalies of reactor systems. State of the art methods have been recently implemented within the well-established signal analysis methodology of the STARS program, at the Laboratory for Reactor Physics and Thermal-Hydraulics (LRT), for investigating nuclear reactor noise and getting a better insight on analysing reactors’ operation. 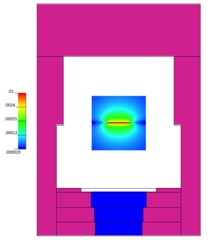 Spent fuel characterization is necessary to improve nuclear fuel design, optimize core refueling patterns and manage the handling, transport and storage of spent fuel assemblies. The experimental characterization of spent fuels includes measuring their gamma and neutron emissions typically with high-purity Germanium and He-3 detectors. In the past few years, however, efforts to develop efficient and low-cost, fast and thermal, neutron detectors have guided the research to the development of new scintillation detectors. These scintillators offer good efficiency, fast-timing properties, and good pulse shape discrimination capabilities for dual gamma and neutron detection. Within the Laboratory for Reactor Physics and Thermal-Hydraulics (LRT), a preliminary analysis was performed through Monte Carlo simulations to design a measurement unit at the HOTLAB based on new scintillators for the detection of fast neutrons emitted by spent fuel. This semester work of Marianna Papadionysiou was presented at the ANS Student conference in April and received two awards for "Best Detection and Measurement" and "Best Overall Research". 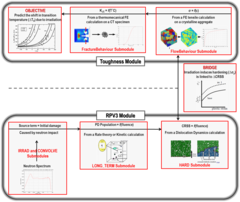 The main threat to the reactor pressure vessel (RPV) operational safety is certainly the radiation damage that hardens and embrittles the steel it is made of. Four decades of research worldwide have allowed understanding and monitoring the phenomena that come into play. At the computational level, a simulation platform, PERFORM-60, has the ambitious aim of predicting the steel evolution for most RPV and operational conditions. It was initially elaborated in the frame of the EU project of the same acronym and is currently further developed to be the end-product of the on-going H2020 EU project SOTERIA. As a contribution of the Laboratory for Reactor Physics and Systems Behaviour (LRS) to SOTERIA, the platform has been rigorously assessed for the first time since its release on a real case study of a Swiss RPV. This critical assessment has been acknowledged by the community and serves as basis for improvements and future developments of the platform within SOTERIA.

Laboratory for Reactor Physics and Thermal-Hydraulics

Hakim Ferroukhi
Head of the Laboratory