Data science (DS) and artificial intelligence (AI) methods opens up an immense range of new opportunities and challenges in the context of continuously enhancing the complex methodologies used as basis for nuclear safety assessments. To this aim, following discussions in the ETSON Technical Board on Reactor Safety, the PSI laboratory for reactor physics and thermal-hydraulics organized on October 20-21, 2022, an international workshop to review and discuss DS/AI within ETSON, the network of European research and expert organizations providing scientific support to national nuclear authorities. With close to 40 participants, the workshop, organized as a hybrid meeting, allowed to put in evidence that similarly as at PSI, a wide and growing range of developments with integration of DS/AI methods are currently taking place in order to complement and/or inform nuclear safety analysis methodologies.

Light Water Reactors (LWRs) such as the ones operating in Switzerland work at relatively high temperatures and pressures. As a consequence, thermal-hydraulics experiments investigating relevant LWRs phenomena at prototypical conditions require test sections with relatively thick steel walls. This poses significant challenges for the implementation of suitable instrumentation to capture phenomena of interest, such as the flow regimes during transition from liquid to steam. The characterization of flow regimes in the presence of boiling is rather complex, and their better understanding would allow to develop mathematical modeling tools that can be used to optimize equipment and better assess safety margins. To perform in-situ measurements of the boiling process under high-pressure conditions, the team of authors from PSI, ETH, and the University of Michigan has developed a new high-fidelity and high-speed imaging system based on x-ray radiography, which provides high-resolution details on the boiling process while being non-intrusive. Since the instrumentation is located outside of the test section, it has also the advantage that can be easily moved to take measurements in different region of the test sections.

Taking good and safe care of the retired … nuclear fuel

After several years of loyal and reliable services during heavy duty operation in a reactor, nuclear fuel must be discharged and go into retirement. For Switzerland, the final place of retirement is planned to consist of a deep geological repository where the used nuclear fuel will be disposed. Before the repository is constructed, the used fuel will need to be stored in wet pools and/or dry storage casks.

During all this time, safe handling of the fuel will remain the top priority for operators and regulators. To gain better knowledge on the relevant phenomena which could potentially affect the fuel thermo-mechanics and safety characteristics during long storage periods as well as to allow predicting their evolution, simulation models are being developed at PSI within the DRYstars project.

A first milestone was recently achieved with the development of models coupled to state-of-the-art fuel performance codes for each of the three main categories of phenomena considered as having high safety relevance for storage, namely helium behaviour, creep behaviour and hydrogen behaviour. 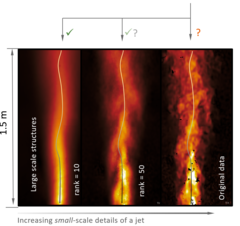 Analysis of a large-scale turbulent round jet

The entire study is an investigation into the self-similarity behavior [1] of first and second order statistical quantities derived from a large-scale jet flow taken from one of the experiments in the PANDA facility using the Proper Orthogonal Decomposition (POD).

What is presented, are the merits, the potential and the characteristics of the corresponding underlying POD analysis. Proper Orthogonal Decomposition (POD) is a mathematical framework to extract large-scale structures which are otherwise eventually masked by the complexity of the fully turbulent flow; example: the meandering of a jet which is not so obvious for the original data.

A safe, economical and environmental friendly disposal of used nuclear fuel represents an essential objective of relevance for all. This guides the approach under development at the laboratory for reactor physics and thermal-hydraulics. Establish higher resolution simulation methods to gain more detailed knowledge on the content of each single nuclear fuel rod ever irradiated in a reactor. Thereafter, use this knowledge to explore optimization approaches that could potentially enlarge the range of disposal options allowing to fulfill the highest level of safety standards while reducing economical costs and geological footprints at the same time. 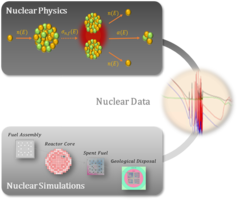 All matter in the universe is made of atoms and all atoms are made of particles. Spontaneous changes within atoms as well as collisions between atoms and surrounding particles are nuclear reaction processes guided by nuclear physics laws. To simulate these processes using computer models, probabilities for the various involved nuclear reactions are required. This is precisely the role of nuclear data: supply the computational models with evaluated quantities representing these nuclear reaction probabilities.

Through this, nuclear data can effectively be seen as the fundamental link between nature and any computer simulation involving nuclear reactions. It is thus of primary importance to continuously improve knowledge on nuclear data. In that context, researchers at the laboratory for reactor physics and thermal-hydraulics have recently focused on the development and application of Bayesian frameworks combining both differential and integral experiments for the improvement of nuclear data. By considering the different experiments together, the aim is to achieve enhancements of the nuclear data evaluations while preserving the basic nuclear physics sum rules.

Between the years 2015 and 2019, PSI coordinated a project investigating the pebble bed high temperature gas-cooled (HTGR) reactor aside with molten salt reactor (MSR) concepts and the use of thorium fuel. The project involved different groups from the ETH domain and the main purpose is to build-up the specific know-how in Switzerland that is necessary to provide in-depth information to decision makers and identify research needs for the future. Several key aspects of both HTGR and MSR reactors were addressed in this research project. These include economic and accident phenomenology studies of the HTGR, fuel cycle optimization of both MSR and HTGR, as well as a study on waste volume reduction of the pebble bed reactors.

In nuclear safety analyses, the assessment of hydrogen release, distribution, and mitigation in the containment has high relevance, because under certain postulated scenarios, combustible mixture could form and hydrogen explosions could damage safety systems.

Safety analyses is carried out using advanced computational tools that have been assessed and validated through a variety of the analyses based experiments representative of the phenomena postulated in the containment and obtained in highly instrumented thermal-hydraulics facilities.

The OECD/NEA HYMERES project (www.psi.ch/en/teg/projects) was carried out to create an experimental database consisting in 24 PANDA tests and 9 MISTRA (CEA, France) tests devoted to phenomena with high relevance in nuclear safety. In two PANDA tests identified as HP6_1 and HP6_2) was investigated the effect of complex natural circulation in a PWR two-room type containment, on the hydrogen distribution, during postulated accidents [1]. The PANDA test specifications have been determined based on scoping analyses with the GOTHIC and APROS advanced computational tools [2].

Identifying a disturbance root-cause from ... noise!

Nuclear reactors are complex systems with inherent stochastic behaviour. In simple words, the behaviour of various reactor processes are continuously fluctuating over their mean values, even under normal operation and steady-state conditions. The detailed and systematic analysis of this noisy behaviour can reveal valuable information about the operating status of the studied nuclear reactor. More importantly, designed modifications of the reactor’s operation or even unexpected deviations from the normal performance can be identified using advanced signal analysis techniques. The STARS program, at the Laboratory for Reactor Physics and Thermal-Hydraulics (LRT) in PSI, based on a tight collaboration with the Swiss nuclear industry, has developed a well-established signal analysis methodology, being continuously improved since more than two decades. The latest enhancements of the PSI signal analysis methodology allow a deeper understanding of the underlying mechanisms that drive the reactor’s operation, and can provide better insight on the root-cause of possible disturbances or malfunctions. Recently, the latest STARS activities in advanced signal analysis techniques were culminated by an international recognition through a special distinction from the AIP Chaos Journal.