LIN researchers use their internationally recognized expertise in the design of advanced neutron instrumentation as well as in sample environment to tackle outstanding scientific challenges in quantum matter research. Here we are particularly interested in understanding how tuning of the underlying microscopic interactions via external control parameters (pressure, field, strain, crystal chemistry) may be used to understand and optimize material properties.

Below a few exemplary projects are summarized.

Magnetic skyrmions are well-suited for encoding information because they are nano-sized, topologically stable, and only require ultra-low critical current densities jc to depin from the underlying atomic lattice. Above jc, skyrmions exhibit well-controlled motion, making them prime candidates for race-track memories. In thin films thermally-activated creep motion of isolated skyrmions was observed below jc as predicted by theory. Creep is an uncontrolled form of motion that for skyrmions is determined via the underlying pinning landscape due to defects and impurities (see figure below). This uncontrolled skyrmions motion is detrimental for race-track memories and is not fully understood. Notably, the creep of skyrmion lattices in bulk materials remains to be explored. Here we show using resonant ultrasound spectroscopy—a probe highly sensitive to the coupling between skyrmion and atomic lattices—that in the prototypical skyrmion lattice material MnSi depinning occurs at jc* that is only 4 percent of jc. Our experiments are in excellent agreement with Anderson-Kimtheory for creep and allow us to reveal a new dynamic regime at ultra-low current densitiescharacterized by thermally-activated skyrmion-lattice-creep with important consequences forapplications.

Strongly correlated metals near magnetic quantum phase transitions are well-established hunting grounds for novel quantum matter states. Because the conduction electrons carry both charge and spin degrees of freedom the abundance of magnetic quantum fluctuations originating at quantum phase transitions entail strong electronic correlations with new characteristic energy scales, as well as the formation of novel states of matter, where unconventional superconductivity may be the most prominent example. The outstanding challenge is that the underlying characteristic energy scales that drive new quantum matter states are tiny compared to typical electronic energy scales in solids, and are, in turn, notoriously difficult to measure.

Exploiting recent advances in the resolution of neutron spectroscopy methods now allow us to take a fresh look to obtain detailed insights in strongly correlated quantum states. Notably,  the novel Modulated IntEnsity by Zero Effort (MIEZE) technique implemented at the neutron spectrometer RESEDA in Munich, ultra-high energy resolution of a few neV can be achieved even when studying magnetic materials. For example, we have used MIEZE to reveal that the spin fluctuations in UGe2 exhibit a dual nature arising from the interplay of localized and itinerant electronic degrees of freedom is consistent with spin-triplet superconductivity proposed for this material.

The spin fluctuation spectrum of the putative spin-triplet superconductor UGe 2 as revealed by Modulated Intensity with Zero Effort (MIEZE) with ultrahigh energy resolution is shown. The spin fluctuations are purely longitudinal and exhibit a dual nature arising from localized 5f electrons that are hybridized with the conduction electrons. Local spin fluctuations are perfectly described by the Ising universality class in three dimensions, whereas itinerant spin fluctuations occur over length scales comparable to the superconducting coherence length, showing that MIEZE is able to spectroscopically disentangle the complex low-energy behavior characteristic of quantum materials.

In strongly correlated quantum matter the substantial coupling between spin and charge degrees of freedom frequently results in the formation of novel electronic states such as 'hidden order', orbital order, electronic nematic order as well as exotic forms of superconductivity.

In f-electron materials frustrated RKKY exchange frequently competes with uniaxial anisotropy (due to large spin-orbit coupling), resulting in a modulated magnetic superstructure as illustrated in panel (a) below. Because of the Kondo interaction that strongly hybridizes the conduction electrons with localized f-electrons a modulated magnetic superstructure may also lead to a modulated electronic density of states (DOS) [see panel (b)]. In panel (c), the Illustration of extreme cases with maximal (top/bottom) and minimal (middle) moment is shown. The DOS at the Fermi level is represented by the blue shade, where the electrons are more localized for maximal moment, and more itinerant for minimal moment. In combination, these ingredients, in principle, allow for the  emergence of intrinsic tunable heterostructures is possible in f-electron metals.

Our neutron spectroscopy measurements suggest that this may be the case in CeRhIn<sub>5</sub>. Notably, the  intimate coupling between magnetic and electronic degrees of freedom is identified by our measurements at lower magnetic fields. In addition,  because the observed easy-axis anisotropy is field-induced and anomalously large, it can be controlled efficiently with small magnetic fields. We show that in CeRhIn5 the resulting field-controlled magnetic superstructure is closely tied to the formation of superconducting and electronic nematic textures. 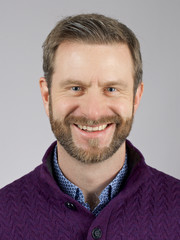