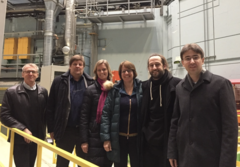 Visit of Delegation from the Technical University of Denmark

On 22 December 2017 a delegation from the Technical University of Denmark DTU visited PSI to discuss the longterm collaboration between the two institutions on several topics such as the Risø/DTU instruments at SINQ, the instrument centre for the Danish users of synchrotron and neutron sources as well as free-electron X-ray lasers DanScatt, the joint construction of the ESS instrument BIFROST and a future centre for neutron and X-ray imaging at DTU. The Danish delegation with Katrine Krogh Andersen (Research Dean of DTU) and Jane Hvolbæk Nielsen (Head of Physics at DTU) used the opportunity also for a visit of some PSI large scale facilities such as SINQ, SLS and SwissFEL. 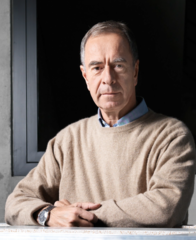 The Charpak-Ritz Prize 2018, jointly awarded by the French Physical Society and the Swiss Physical Society, has been bestowed to Roland Paul Horisberger (NUM, Laboratory for Particle Physics) for his numerous contributions to the development of precision silicon vertex detectors for particle physics experiments as well as for the application of these technologies in X-ray photon sciences. With his group at PSI he has created the foundations that allowed in 2007 the creation of a spin-off company that now is the market leader in single photon counting pixel detectors at synchrotrons world wide (text: courtesy Swiss Physical Society, photo: courtesy ScanderbegSauer Photography). Read more 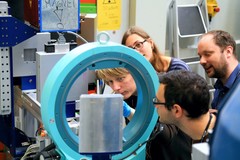 To take full advantage of the upcoming European Spallation Source facility ESS, strategic funding has been allocated to rebuild and expand the Swedish neutron scattering community. One of the most important actions is the establishment of the Swedish national graduate school in neutron scattering (SwedNess). Up to 40 PhD students will be fully funded, employed and trained within this school. In end of September 2017, the first 20 PhD students arrived at the Paul Scherrer Institute (PSI) and the Swiss Spallation Neutron Source (SINQ) for their very first hands-on training in neutron scattering. During their week at PSI the SwedNess students obtained specific training in neutron reflectometry as well as neutron and x-ray imaging. The training was very much appreciated by the students and PSI looks forward to welcoming them back in a near future as scientific users of the SINQ neutron facility. 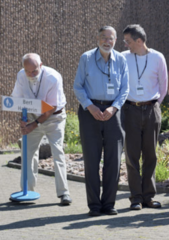 Symposium in honor of Bert Halperin at PSI organized by NUM

The Paul Scherrer Institute and the Condensed Matter Theory Group hosted July 3-6 2017 the symposium entitled 'Celebrating Physics with a Good Excuse' in the honor to the 75th birthday of Bertrand Halperin. Fourteen theorists and seven experimenters, including three researchers from PSI, and coming from six different countries gave colloquium style talks on topics ranging from the fractional quantum Hall effect to the computational complexity of birdsong learning. Participants came from as far as India. 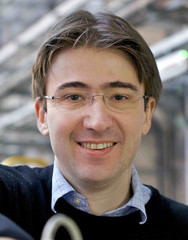 Michel Kenzelmann new head of the LNS from July 1, 2017

Prof. Dr. Michel Kenzelmann has been appointed as new head of the Laboratory for Neutron Scattering and Imaging LNS starting July 1, 2017 on. Michel received his Ph.D. from the University of Oxford before he moved to NIST and John Hopkins University as postdoctoral fellow. In 2004 he joined PSI as an SNF Professor and became head of the NUM laboratory LDM in 2008. Since 2014 Michel holds a titular professorship at the University of Basel. The NUM department also thanks Christof Niedermayer cordially for leading the laboratory ad interim for the last six months.

Within a re-organisation NUM concentrates and extends its activities in the field of solid state chemistry (SSC): from July 1 the SSC activities of LDM will be transferred to the new NUM laboratory LMX and two new groups will be created: the group "3703 - Solid State Chemistry" lead by Dr Ekaterina Pomjakushina (upper photo) and the group "3704 - Physical Properties of Materials" lead by Dr Marisa Medarde (lower photo). Both groups are open for collaborations with other PSI research groups. We wish both new group leaders success and satisfaction for their new tasks. 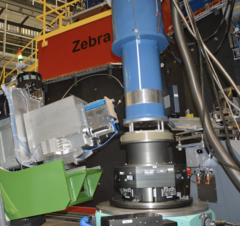 In 1997 the Swiss spallation neutron source SINQ started user operation and PSI has celebrated the 20th anniversary of SINQ with a scientific symposium on April 18, 2017 together with many colleagues from Switzerland and abroad. At the symposium it was not only looked back at past achievements, also recent scientific highlights were presented as well as the SINQ neutron guide and instrument upgrade program that will make SINQ fit for the next 20 years. Finally, the symposium also marked the change of the NUM Division Head from Kurt N. Clausen to Christian Rüegg, more information. 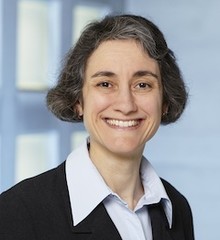 Laura Heyderman new head of the LMX from April 1, 2017

Prof. Dr. Laura J. Heyderman has been appointed as new head of the Laboratory for Multiscale Materials Experiments LMX starting April 1, 2017 on. After her PhD in the field of magnetic thin films at the CNRS in Paris she worked as a Postdoc at the University of Glasgow. Gathering experiences in different industrial research labs she joined PSI in 1999, where she became a group leader in 2008. Laura holds a professorship for Mesoscopic Systems at the ETH Zurich in the Department of Materials and is also President of the PSI Research Committee. 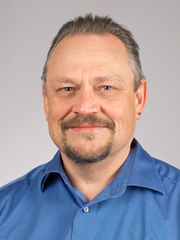 Prof. Dr. Thomas Lippert from the Laboratory for Multiscale Materials Experiments in NUM has been appointed as new "Editor in Chief" of the journal Applied Physics A, following on from Michael Stuke. 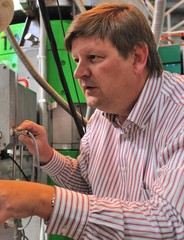 Prof. Dr. Christof Niedermayer has been appointed as new head (ad interim) of the Laboratory for Neutron Scattering and Imaging LNS from January 1, 2017 on. Christof studied physics and received his PhD at the University of Konstanz/DE. He spent his postdoctoral fellowship at Vancouver University in Canada before returning back to Konstanz for his habilitation. In 2002 Christof joined the LNS as instrument scientist being responsible for the Triple-Axis Spectrometer RITA-II at SINQ. Since 2011 he is head of the LNS spectroscopy group. In addition, he holds a professorship at the University of Konstanz since 2013. 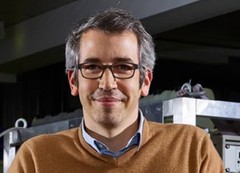 Prof. Dr. Christian Rüegg has been appointed as new head of the division NUM (Research with Neutrons and Muons) starting from January 1, 2017. Christian studied Physics at ETH Zurich, performed his PhD thesis at the Laboratory for Neutron Scattering and received his PhD in 2005. After that he moved to the London Centre for Nanotechnology of University College and Imperial College London, first as a PostDoc, later as Royal Society University Research Fellow, Lecturer and Reader. Since 2011 Christian was head of the Laboratory for Neutron Scattering and Imaging (LNS) within NUM. Furthermore he is full professor at the University of Geneva.
Christian will suceed Kurt Clausen, who will retire on April 30, 2017 after 13 years as head of the NUM division and three years as deputy director of PSI. 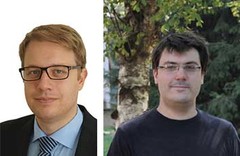 Two emerging leaders in fundamental physics with strong programs at the PSI neutron facilities have been awarded prestigious grants:
Florian Piegsa completed his PhD thesis in the group of Ben van den Brandt in LDM/NUM cooperating with TU Munich (Oliver Zimmer) and was the first recipient of the PSI thesis medal in 2009. After postdoc positions at the ILL Grenoble and at the ETH Zurich he worked in the ETH group of Klaus Kirch for the last years. He pursued experiments at SINQ and is a member of the neutron electric dipole moment (nEDM) collaboration at the PSI UCN source. Now he has been granted a SNF professorship at the Albert Einstein Center at the University of Bern and a Starting Grant from the European Research Council (ERC) in order to push forward a new experimental method to search for the nEDM.
Also Guillaume Pignol (LPSC Grenoble), another member of the international nEDM collaboration at PSI, has been awarded an ERC Starting Grant for his proposal “The Neutron Electric Dipole Moment: pushing the precision to understand the matter-antimatter asymmetry” targeting the upcoming n2EDM effort.