Welcome to the Microspectroscopy Group

The Microspectroscopy Group has a long experience in synchrotron based hyperspectral imaging for a wide variety of materials and involving many different scientific disciplines. In particular we study the nanostructures of novel organic materials and the magnetic properties of thin films and multilayers employing a combination of X-ray microscopy and spectroscopy. We operate two beamlines at the SLS, PolLux and NanoXAS. At these beamlines we perform our research and provide support for external users.

Scientists have used state-of-the-art 3D printing and microscopy to provide a new glimpse of what happens when taking magnets to three-dimensions on the nanoscale – 1000 times smaller than a human hair. 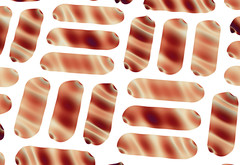 Artificial spin ices are periodic arrangements of interacting nanomagnets which allow investigating emergent phenomena in the presence of geometric frustration. Recently, it has been shown that artificial spin ices can be used as building blocks for creating functional materials, such as magnonic crystals. Scientists have now investigated the GHz dynamics in a spin ice with a chiral geometry. They found that the system possesses a rich spin-wave spectrum owing to the presence of anisotropic magnetostatic interactions. These results contribute to the understanding of GHz magnetization dynamics in spin ices and are relevant for the realization of reconfigurable magnonic crystals based on spin ices.

Looking inside airborne particles for the chemistry responsible for their adverse health effects.

Chemical changes inside of breathable airborne particles can cause reactive oxygen species (ROS) and carbon centered radicals (CCRs) to form, which are harmful to our bodies and induce oxidative stress in lungs. Using X-ray spectromicroscopy at the PolLux beamline and mimicking the environmental and sunlit conditions aerosol particles experience in the atmosphere near the Earth Surface, it was recently found that highly viscous organic particles with low water content can attain high concentrations of ROS and CCRs that persist over long times. Natural particles like these will occur in ambient humidity below 60% and effectively trap ROS and CCRs inside that react when exposed to light.