Coexistence of magnetism and superconductivity is found in an increasing number of materials such as the cuprates [1], borocarbides, heavy fermion and organic superconductors, and recently also the ferropnictides [2,3]. These two order parameters typically compete and small pertubations may change the balance between the two. The boundary between pure superconductivity and the coexistence phase can be tuned by doping, external field, or pressure. Suppression of superconductivity by application of a magnetic field favors the coexistence phase [4]. The last two decades have seen a tremendous progress in the understanding of these materials, although there is still no consensus on the mechanism leading to high temperature superconductivity. This is due to a lack of understanding of the state of matter out of which superconductivity arises. In the optimally and underdoped materials, this state exhibits a pseudogap at temperatures large compared to the superconducting transition temperature [5], both in the charge and spin sectors. There is an intense debate of whether the pseudogap phase is a precursor pairing state without superconducting coherence or a competing phase with a hidden order parameter.

Inelastic neutron scattering experiments have revealed the existence of well-defined (commensurate and incommensurate) magnetic excitations, both in the superconducting and normal states [3,4].

Local probe and neutron diffraction experiments in La2-xSrxCuO4 clearly show that at the doping concentration x=1/8 a decrease of TC is accompanied by enhanced antiferromagnetism [x1,4], INS experiments in the vortex phase have shown the existence of field-induced magnetic correlations [x2] (static close to x=1/8 or dynamic close to optimum) together with an unusual interplay between the spin- and vortex-dynamics [x3].

6) Small angle neutron scattering (SANS) experiments have recently revealed the existence of a field-induced phase transition from hexagonal to square in HTSC (Fig. 2), indicating the coupling of the vortices to some in-plane anisotropy (SC gap or Fermi velocity?). At higher temperatures and fields, the vortex lattice melts into the so-called vortex-liquid state [7]. 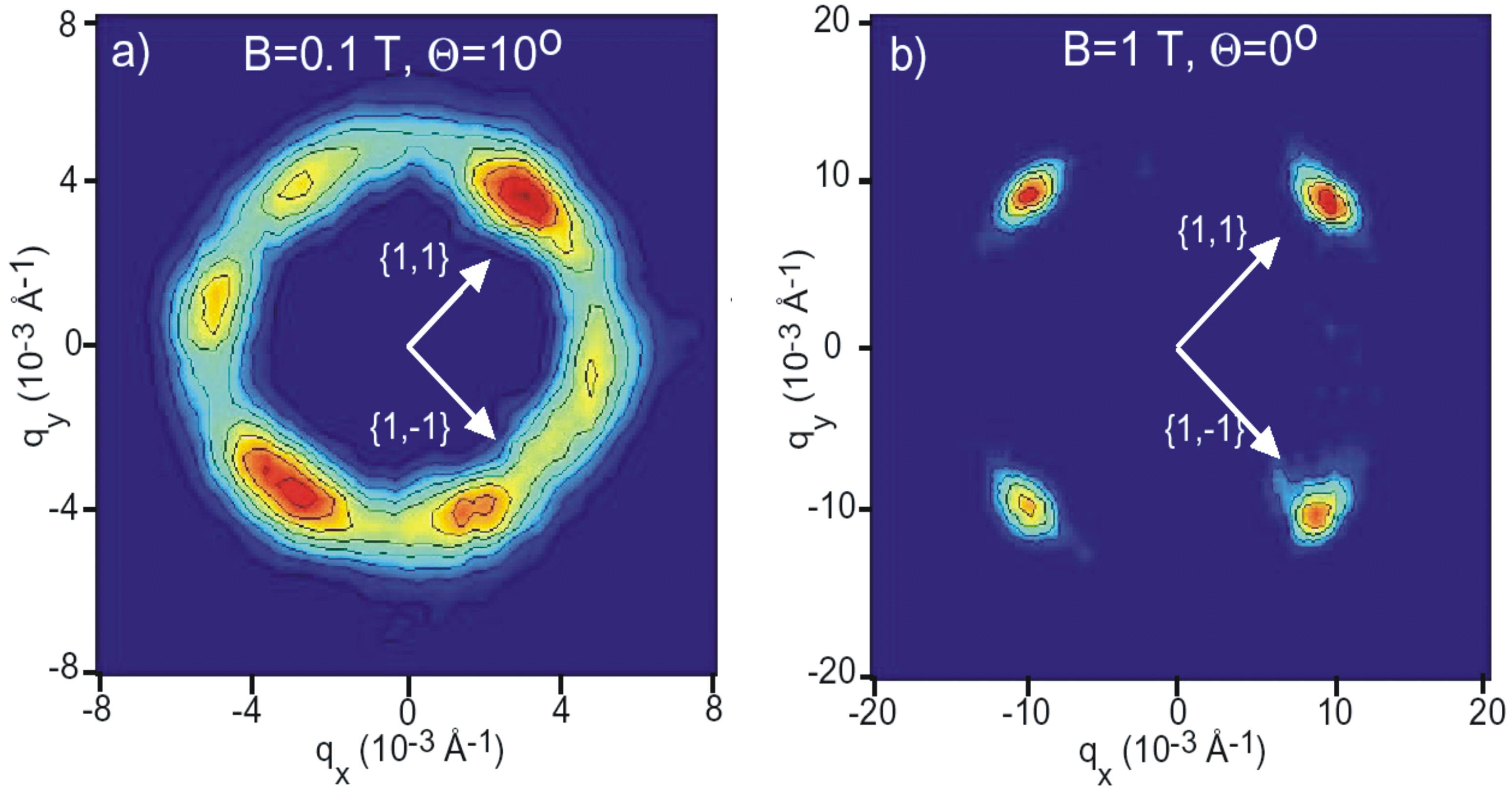 zoom
Fig. 2: SANS diffraction pattern of La1.83Sr0.17CuO4 obtained after field cooling in a) 0.1 T, and b) 1 T showing the hexagonal to square vortex lattice transition with increasing magnetic field.

The above-mentioned results constitute the pieces of a puzzle that remains to be assembled. Therefore, in order to better understand the links existing between the electronic, magnetic and lattice degrees of freedom in these materials, several projects involving various experimental techniques (both within PSI and outside) have been initiated. It is our belief that such a multi-disciplinary approach represents the most promising path toward a better understanding of strongly correlated systems in general, and of HTSC in particular.

A) Magnetic vs electronic properties INS, μSR and ARPES investigations of both the magnetic and electronic excitations in various HTSC as a function of doping, temperature or magnetic field. These studies aim at investigating, at a quantitative level, whether or not the observed spin excitations can be explained by Fermi-liquid like models. In order to achieve this goal a collaboration with the theory group of the NUM Division has recently been initiated.

B) Vortex phase Investigation of the (electron and hole) doping and temperature dependence of the vortex lattice by means of SANS and μSR measurements to understand the origin of both the field-induced phase transition and the microscopic nature of the vortex-liquid state.

Complete list of the highlights from the Division Research with Neutrons and Muons.