The Thin Films and Interfaces Group

Thin films are nowadays utilized in many applications, ranging from semiconductor devices to optical coatings and are even present in pharmaceuticals (polymers). This wide-spread application of films with thicknesses from atomic monolayers to microns is due to the developments of thin film deposition techniques. Thin films are also important for studies of materials with new and unique properties due to the possibility of tuning their crystallographic and morphological properties. The thin film approach, i.e. the presence of interfaces (to a substrate or the film surface) adds more degrees of freedom for influencing the properties of materials, e.g. by lattice strain or surface functionalization. For these fundamental studies of material properties large research facilities such as synchrotron radiation or neutron spallation sources are one of the keys that the Paul Scherrer Institute (PSI) provides. Read more 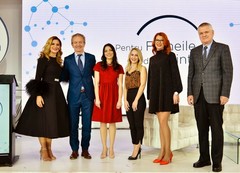 Congratulations to our former postdoc, Alexandra Palla-Papavlu (4th from the left), for winning the L’Oreal Prize for Woman in Science(link is external) in the category Physics in Romania

Currently, all upcoming seminar will be internal, online group seminars. As soon as we are able to proceed with seminars with an audience, we will announce them on this web page. We apologize for the inconvenience. 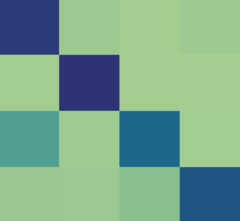 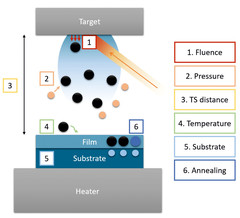 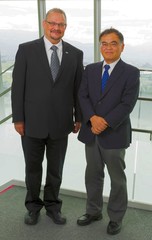 Special interview with Prof. Thomas Lippert (PSI and Principle Investigator at I2CNER, Kyushu University) and Prof. Tatsumi Ishihara (Associate Director I2CNER, Kyushu University) on Current and Future Energy Research and Development in Europe: Perspectives from Switzerland, Germany and Japan. The interview is being published in the August 2017 issue of the Energy Outlook of the International Institut for Carbon-Neutral Energy Research, I2CNER.

Student projects at the Thin Films and Interfaces Group

Most of the time we have student projects related to the work we do. Just talk to us if you are interested in something we are working on not advertised on our pages.

Currently, we are looking for a Semester or Master Student on the topic of Photocatalytic H2 production starting January/February 2022. The semiconductor material is the main part of any system harvesting solar energy, which transforms absorbed solar photons into excited electronic states. Biological systems provide an environment to operate in a more complex, yet more efficient fashion compared to many synthetic catalysts. Thus, a platform for solar fuel development must combine the best of both systems: the light harvesting capabilities of semiconductors with the catalytical power of biology, known as inorganic-biological hybrid systems for semi-artificial photosynthesis.

PhD projects at the Thin Films and Interfaces Group

At present, we have no open PhD positions available. Other open positions are always published on the PSI Open Positions page.

Oxynitrides have been shown to be promising visible light water splitting photocatalysts, but rapidly degrade under operating conditions. With a custom designed photoelectrochemical cell, we perform operando grazing incidence X-ray absorption spectroscopy measurements on the oxynitride semiconductor SrTaOxNy during photocatalytic solar water splitting. We show that the nature of the A-site (Sr) and its evolution during operation have large impacts on the overall stability and catalytic activity of the material, leading to an enriched BO2 (Ta(OH)/TaO(OH)) like surface. However, this usually beneficial effect with respect to increased surface hydrophilicity has complications for the efficiency of the photocatalytic process, as the OH and O(OH) intermediates formed are in competition between O2 generation and NOx species formation in the initial stages of operation. Operando characterisation of the evolution of the electronic structure of the photocatalyst proves to be an invaluable tool for the rational design and discovery of new and better performing materials.