Cancer cells overexpress receptors on the surface, which can be specifically targeted with molecules coupled to a radionuclide. Depending on the radionuclide emitter, it can be applied for cancer imaging (diagnostic) or therapy. In the last years, the therapeutic approach gained a lot of attention due to its promising achievements in the treatment of various tumors. Yet, the activation of therapy resistance mechanisms as well as toxicity to healthy organs limits therapeutic efficacy. Thus, we investigate the survival mechanisms (signaling pathways), which are activated in response to the different types of TRTs and the biology of targeted receptors with the ultimate goal of developing improved and more efficacious treatments. In order to reveal and validate novel points of therapeutic interventions we employ innovative technologies including drug library screens, quantitative mass spectrometry and comprehensive bioinformatics analysis as well as in vitro models including 3D culture spheres and tumor mouse models. The clinical relevance is further investigated in collaboration with University Hospitals. In our recent study, kinase library screens identified signaling pathways, which inhibition has the potential to substantially improve therapeutic response to radiopharmaceuticals. In the latter study, pharmacological inhibition of mammalian target of rapamycin complex 1 (mTORC1) by RAD001 led to increased CCKBR-specific tumor uptake of radiolabeled minigastrin [177Lu]Lu-PP-F11N and enhanced its  therapeutic efficacy (Grzmil et al., 2020, DOI: thno.45440).

In order to understand survival-promoting mechanisms and to identify novel radiosensitizing strategies, lately we analyzed cancer cell responses to different types of radiotherapy by proteomics and phosphoproteomics analysis. Our comparative study identified differences and similarities in the activation of the signaling pathways and DNA repair mechanisms in response to actinium-225 (α-emitter), lutetium-177 (β-emitter) and external beam radiation therapy (ɣ-rays). In summary, our research points to new directions for the development of radiosentisizing approaches and provides a proof-of-concept for combining TRTs with molecular targeted cancer therapies. The Swiss Cancer League (KFS-3960-08-2016-R) supported our work.

The β-cells, which can be found in small structures within the pancreas called the islets of Langerhans, are necessary in normal metabolic function of the body, but are also of importance in a variety of diseases, such as diabetes mellitus, insulinomas, and congenital and adult hyperinsulinemic hypoglycemia (CHI and AHH, respectively). The glucagon-like peptide-1 receptor (GLP-1R) is highly abundant on the β-cells, thus making it a good target for radiopharmacy. In our approach, we target the GLP-1R with tracers based on the peptide exendin-4, which can be radiolabeled for diagnostic imaging or for therapy. It is very similar in structure to the endogenous ligand of GLP-1R, GLP-1, but is much more stable in the body. Exendin-4 tracers are already in clinical use for the detection of insulinomas, however, further improvement is needed to address some of their shortcomings, such as the characteristically high accumulation in the kidneys, which on one hand could distort the image obtained during a diagnostic scan (depicted in Figure Insulinoma), and on the other hand may have a negative impact on the patient’s health.

We have made a number of these improvements, such as further stabilization of the structure for better clinical use, and addressing the kidney uptake through changing the pharmacokinetic properties of the peptide. Currently, we are investigating the interaction between GLP-1R and its different ligands. This research is performed under the collaborative project BetaCure funded by the European Commission under the 7th framework program. The following members of the Radiopharmacology group are involved in this project: Simon Käppeli, Alain Blanc.

The extracellular matrix (ECM) is a three-dimensional space consisting of a plethora of fibrous forming proteins such as collagens, elastin, fibronectin as well as glycoproteins and many other soluble factors, surrounding cells in all tissues.

Within the human body, ECM functions go beyond providing the mechanical scaffolds into which cells are embedded, as the ECM also regulates diverse cellular functions such as survival, growth, migration, differentiation and homeostasis. In recent years, it became evident that the ECM also plays a crucial role in pathological processes e.g. invasive cancers, muscular dystrophy and fibrotic diseases. Indeed, disease states are often accompanied by remodeling of the ECM, inducing changes in its composition, architecture and mechanical state.

In close collaboration with the group of Prof. Viola Vogel at ETHZ, we aim to target ECM changes during pathologic processes by employing radiolabeled peptides that bind differentially expressed ECM proteins. Our main focus lies in the development of mechanosensitive probes that specifically bind relaxed fibronectin fibrils. In healthy tissues, fibronectin is mainly found in a stretched state, but its strain changes during disease development, resulting in a higher proportion of relaxed fibronectin. Employing the peptide FnBPA5 radiolabeled with Indium-111, we have shown that we can specifically target relaxed fibronectin and thereby image prostate tumors in xenografted mice.1

We now aim to optimize the pharmacokinetic and pharmacodynamic characteristics of FnBPA5 for both diagnostic and therapeutic applications. To achieve this, we are currently investigating strategies to reduce accumulation of the radiotracer in the kidneys and the influence of sequence modifications on the binding to fibronectin. Moreover, we are interested in the pathobiology of plasma and cellular fibronectin and their role in the establishment and progression of different diseases such as fibrosis and endometriosis.

We have received a 4 year SNF grant including 2 PhD students for the further evaluation of this approach. 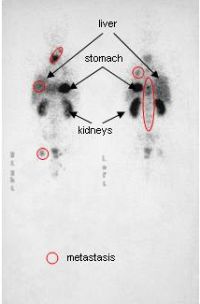 The CCK-2 receptor is overexpressed in medullary thyroid cancer and small cell lung cancers. There is no good therapy option for both cancer types if they are metastasized. Therefore new therapeutic strategies are necessary. One option is to use the CCK-2 receptor as a target. Different receptor binding peptide were evaluated and minigastrin derivatives were figured out as the lead substance with the highest tumour uptake. The disadvantage of these compounds was the high kidney uptake which leads to kidney damage in the therapeutic approach. The reason for the high kidney uptake was the chain of six Glutamic acids in the peptide.


Different research efforts were made to overcome the kidney uptake problem. These research efforts are summarized in a review from the Radiopharmacy group in Njimegen. The research were the focused and combined in a european COST action in which 12 compounds were compared. The best compounds will be more deeply evaluated and will be applied as a therapeutic radiopharmaceutical first in preclinicals and later on if good results can be shown in clinical settings.

One of our current research goals is the development of novel concepts and tools for preclinical radioimmunotherapy of disseminated ovarian cancer by targeting the L1 cell adhesion molecule (L1CAM) with the antibody chCE7. We attempt to further improve the potency of radioimmunotherapy by using novel therapeutic radionuclides, including Terbium-161 (e.g. Grünberg et al. 2014: DOI: s00259-014-2798-3. We are evaluating new strategies for combination of radioimmunotherapy with existing therapy modalities for disseminated ovarian cancer (e.g. Lindenblatt et al., 2014 and 2018, DOI: s13550-014-0054-2 and s12885-018-4836-1. Further, we are analysing the role of L1CAM expression in ovarian cancer stem cells (CSCs), a rare cancer cell population with stem cell-like properties. These cells have the ability for self-renewal and differentiation. These properties are likely the reason for treatment failures, disease recurrence and metastases. CSCs are highly tumorigenic and therapy resistant.

We found that dual expression of L1CAM and CD133 defines this new ovarian CSC population and the expression of L1CAM is mainly responsible for the high radioresistance of these cells. Targeting ovarian CSCs with anti-L1CAM antibodies offers a new strategy for CSC therapy. In particular, L1CAM is expressed in all CD133+ ovarian CSCs and so far, L1CAM has not been described in normal stem cells DOI: cancers12010217. We will test if it is possible to overcome the radioresistance of cancer stem cells and therefore to eradicate these cells with a suitable radioisotope for therapy. For this project we set up a close collaboration with Prof. Dr. Anna Dubrovska from the National Center for Radiation Research in Oncology (OncoRay) in Dresden, Prof. Dr. med. Viola Heinzelmann, chair of the Women’s Hospital Basel and of the Department of Gynaecology, University Hospital Basel and Prof. Dr. G.V. Shiva Shankar, Professor of Mechano-Genomics, Department of Health Sciences and Technology, ETH Zurich & Paul Scherrer Institute, Switzerland . This work is supported by the Swiss Cancer Research Foundation (Project No. KFS 3585-02-2015 and KFS-4876-08-2019) to Jürgen Grünberg.