Here you find current News from the NUM division. For scientific highlights, please have a look here. 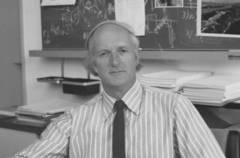 Symposium in memory of Jean-Pierre Blaser

Jean-Pierre Blaser (1923-2019) was one of the founders of the Swiss Institute for Nuclear Research SIN - one of the two institutions, which merged to the Paul Scherrer Institut in 1988. From 1988-1990 he was the first Director of the Paul Scherrer Institut. On the occasion of his first obit ETH Zurich and PSI organised a symposium to honour the lifetime achievement of this outstanding Swiss physicist. 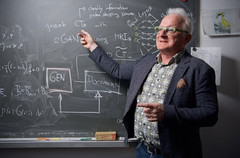 Modelling and simulation pay off

Researchers in the Laboratory for Scientific Computing and Modelling at the Paul Sherrer Institute PSI solve the most complex problems through a combination of theory, modelling, and high-performance computing. With powerful computers, they simulate the smallest molecules or large-scale research facilities.

Workshop on the Physics of Fundamental Symmetries and Interactions

The 5th Workshop on the Physics of Fundamental Symmetries and Interactions (PSI2019) took place from 20 to 25 October 2019 at PSI, bringing together 200 scientists from all over the world working on some of today’s most precise particle-physics experiments at the low-energy frontier. 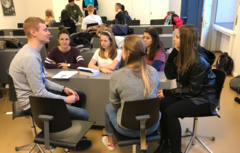 TecDay is an SATW initiative that was developed at the Kantonsschule Limmattal in 2007 and has since been rolled out to more than 60 secondary schools across Switzerland. By the end of 2017 it had reached  around 45,000 students and 5,000 teachers. In December 2019 the LMX contributed in one module, that received a total of 16 students over the course of a morning. The module was organized in three different “stations”, each one focusing on one topic or area that the group is working on.

On 27 November 2019, at the recommendation of the ETH Board, the Federal Council has appointed Christian Rüegg as the new director of the Paul Scherrer Institute PSI. The 43-year-old will take over from Thierry Strässle, who has headed the institute on an interim basis since the beginning of the year. Mr Rüegg is currently head of the Neutrons and Muons Division at the PSI. He will take up his new position on 1 April 2020.

The MaNEP Network met at the University of Bern, Department of Chemistry and Biochemistry, for a Workshop on Materials Discovery and its annual Forum Meeting. The community discussed potential future joint initiatives and the role of MaNEP.

The League of advanced European Neutron Sources (LENS) with the participation of PSI held its second General Assembly at Institut Laue-Langevin (ILL) together with meetings of its five working groups and the LENS Executive Board. The meetings brought the consortium’s operational working groups together with the leaders of the LENS member facilities to advance priority actions for the organisation in the months to come.

Take a flight through ESTIA

PSI is entirely responsible to build the polarised neutron reflectometer ESTIA at the European Spallation Source ESS in Lund, Sweden. The lead ESTIA scientist Artur Glavic (LNS/NUM) has now simulated a virtual tour of the neutrons travelling through the instrument from the focusing neutron guide to the detector.

On October 1 and 2, the Laboratory of Neutron and Muon Instrumentation (LIN) hosted the first meeting of the working group on “Synergies in Technology Development and Operation” of the League of Advanced European Neutron Sources, LENS, to kick off developments aimed at creating a new generation of neutron technology.