at the Laboratory for Multiscale materials eXperiments

We are working on the synthesis and characterization of ceramic and single crystal materials with novel electronic and magnetic properties. Numerous complex oxide materials have been successfully crystallized by the Traveling Solvent Floating Zone (TSFZ) method using an optical furnace. This includes cuprates, manganates, orthoferrites, cobaltites, borates and phosphates. Novel chalcogenide iron superconductors have been synthesized as powders and single crystals (Bridgman method). read more 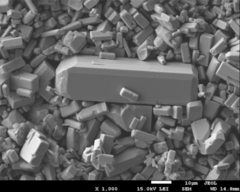 Due to the Corona pandemic starting 1. May 2021, new access rules to the SSC user facilites will apply. More details can be found at https://www.psi.ch/de/lmx-ssc/access-rules.

On 31.05.2019, Fei Li passed successfully his PhD defence at the ETH Materials Department. The title of his thesis is "Crystal and Magnetic Structure of R1/3Sr2/3FeO3 (R = La,Pr,Nd)” 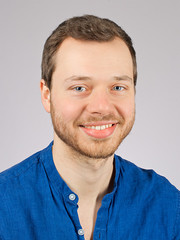 Dr Pascal Puphal (currently a Postdoc at PSI, LMX, Solid State Chemistry Group) has recently been awarded with the DGKK young researcher price from the German Crystal Growth Community on his Ph.D. work performed in the group of Cornelius Krellner at the Geothe University Frankfurt am Main on the topic "Tuning two dimensional Cu-based quantum spin systems". The work covers the stabilization and proof of a 2D dimer structure by Sr substitution in Han Purple and the research of novel kagome materials of the prominent quantum spin liquid candidate herbertsmithite by the hydrothermal route. 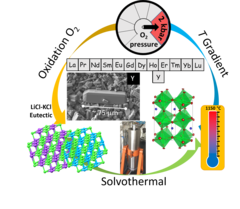 Schematic representation of the method used to grow RENiO3 nickelate single crystals covering the full 4f series and Y. This novel procedure, based on the use of moderate oxygen gas pressures (2000 bar), solvothermal growth in a temperature gradient, and highly reactive eutectic salt mixtures as fluxes, yields prismatic-shaped crystals with flat facets and sizes up to ∼75 μm.

A quantum magnetic analogue to the critical point of water

At the liquid–gas phase transition in water, the density has a discontinuity at atmospheric pressure; however, the line of these first-order transitions defined by increasing the applied pressure terminates at the critical point, a concept ubiquitous in statistical thermodynamics. In correlated quantum materials, it was predicted and then confirmed experimentally that a critical point terminates the line of Mott metal–insulator transitions, which are also first-order with a discontinuous charge carrier density. In quantum spin systems, continuous quantum phase transitions have been controlled by pressure, applied magnetic field and disorder, but discontinuous quantum phase transitions have received less attention. 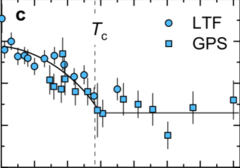 Non-centrosymmetric superconductors (NCSCs) are promising candidates in the search for unconventional and topological superconductivity. The α-Mn-type rhenium-based alloys represent excellent examples of NCSCs, where spontaneous magneticfields, peculiar to time-reversal symmetry (TRS) breaking, have been shown to develop in the superconducting phase. By converse, TRS is preserved in many other isostructural NCSCs, thus leaving the key question about its origin fully open. Here, we consider ... 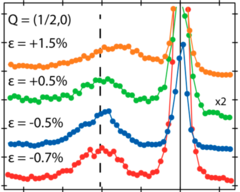 Strain engineering of the charge and spin-orbital interactions in Sr2IrO4

Understanding the relationship between entangled degrees of freedom (DOF) is a central problem in correlated materials and the possibility to influence their balance is promising toward realizing novel functionalities. In Sr2IrO4, the interaction between spin–orbit coupling and electron correlations induces an exotic ground state with magnetotransport properties promising for antiferromagnetic spintronics applications. 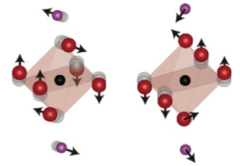 Elucidating the role of different degrees of freedom in a phase transition is crucial in the comprehension of complex materi- als. A phase transformation that attracts significant interest is the insulator-to-metal transition of Mott insulators, in which the electrons are thought to play the dominant role. Here, we use ultrafast laser spectroscopy and theoretical calculations .... 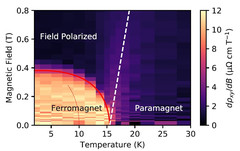 In magnetic Weyl semimetals, where magnetism breaks time-reversal symmetry, large magnetically sensitive anomalous transport responses are anticipated that could be useful for topological spintronics. The identification of new magnetic Weyl semimetals is therefore in high demand, particularly since in these systems Weyl node configurations may be easily modified using magnetic fields. Here we explore experimentally the magnetic semimetal PrAlGe, and unveil a direct correspondence between easy-axis Pr ferromagnetism and anomalous Hall and Nernst effects.

We report the discovery of topological magnetism in the candidate magnetic Weyl semimetal CeAlGe. Using neutron scattering we find this system to host several incommensurate, square-coordinated multi-k⃗ magnetic phases below TN. The topological properties of a phase stable at intermediate magnetic fields parallel to the c axis are suggested by observation of a topological Hall effect.

Recently, the transition metal dichalcogenide (TMD) system 2M-WS2 has been identified as a Dirac semimetal exhibiting both superconductivity with the highest Tc ~ 8.5 K among all the TMD materials and topological surface states. Here we report on muon spin rotation (μSR) and density functional theory studies of microscopic SC properties and the electronic structure in 2M-WS2 at ambient and under hydrostatic pressures (pmax = 1.9 GPa).

We explore two methods for single-crystal growth of the theoretically proposed magnetic Weyl semimetals RAlGe (R = Pr, Ce), which prove that a floating-zone technique, being both crucible- and flux-free, is crucial to obtain perfectly stoichiometric RAlGe crystals. In contrast, the crystals grown by a flux-growth technique tend to be Al-rich. We further present both structural and elemental analyses, along with bulk magnetization and electrical resistivity data on the crystals prepared by the floating-zone technique. Both systems with the intended 1:1:1 stoichiometry crystallize in the anticipated polar I41md (No. 109) space group, although neither displays the theoretically expected ferromagnetic ground state.